"Martin" and "Lothar", the devastating storms of 1999 wreaked havoc on European soils. From December 24 to 28, powerful winds approaching 180km/h blew over France, affecting 6% of the French forest.

"Martin" and "Lothar", the devastating storms of 1999 wreaked havoc on European soils. From December 24 to 28, powerful winds approaching 180km/h blew over France, affecting 6% of the French forest. « The storm of the century »

On December 24, 1999, the first breezes touched the landscape of the Mont Saint-Michel. The cloud mass, under the rotation of the winds, formed a cyclone that sounded the alarm.

On December 26 at 11:00 am, Météo France observed the storm "Lothar" forming in the North of France, with winds of up to 130km/h. The next day, a second storm, even more powerful than the first, was already descending along the Aquitaine region. The hurricane "Martin" swept across the South of France with gusts of up to 199 km/h, sweeping away nearly one million hectares of forest.

According to the Water and Forests Registry, one would need to go back to the 17th century to find traces of such a devastating storm1. The storms of 1999 affected 60% of the French territory and destroyed 968,000 hectares of forest according to the National Forests Office, a surface area that is bigger than the whole Landes department.

A storm caused by a jet stream

Jet streams are mainly responsible for the unexpected phenomenon of the 1999 storms.

This exceptionally powerful stream of wind comes from the encounter between cold air masses from the Northern hemisphere and warm air masses from the Equator. Jet streams plunge into the middle of the circulating cloud mass and forms a vortex on the water surface. The force of the vortex created is proportional to that of the jet stream: in this case, the latter reached an unprecedented speed of 529 km/h on December 26, 1999, announcing the arrival of the second Martin storm, even more violent than the previous one. 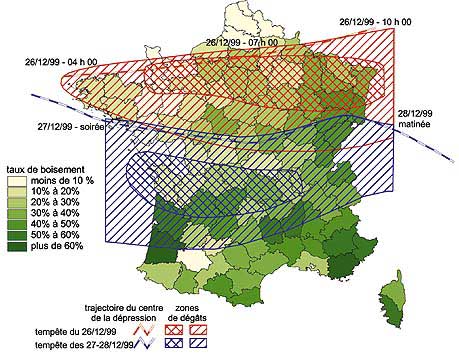 Repartition of the damages cause by Lothar et Martin. Credit : Météo-France, ONF

Many restoration initiatives actually find their source in those storms. In France, Reforest’Action supports several projects to curb the damages and favour the renewing of the stands destroyed.

For example, the Clayeures forest, situated in the Grand Est region, particularly suffered from the storms. The trees that survived are now growing old and suffer from climate change. In order to renew this drying forest, Reforest’Action supports an assisted natural regeneration project that includes the planting of l 18 465 trees from various species of harwoods and softwoods during the 2021-2022 season. 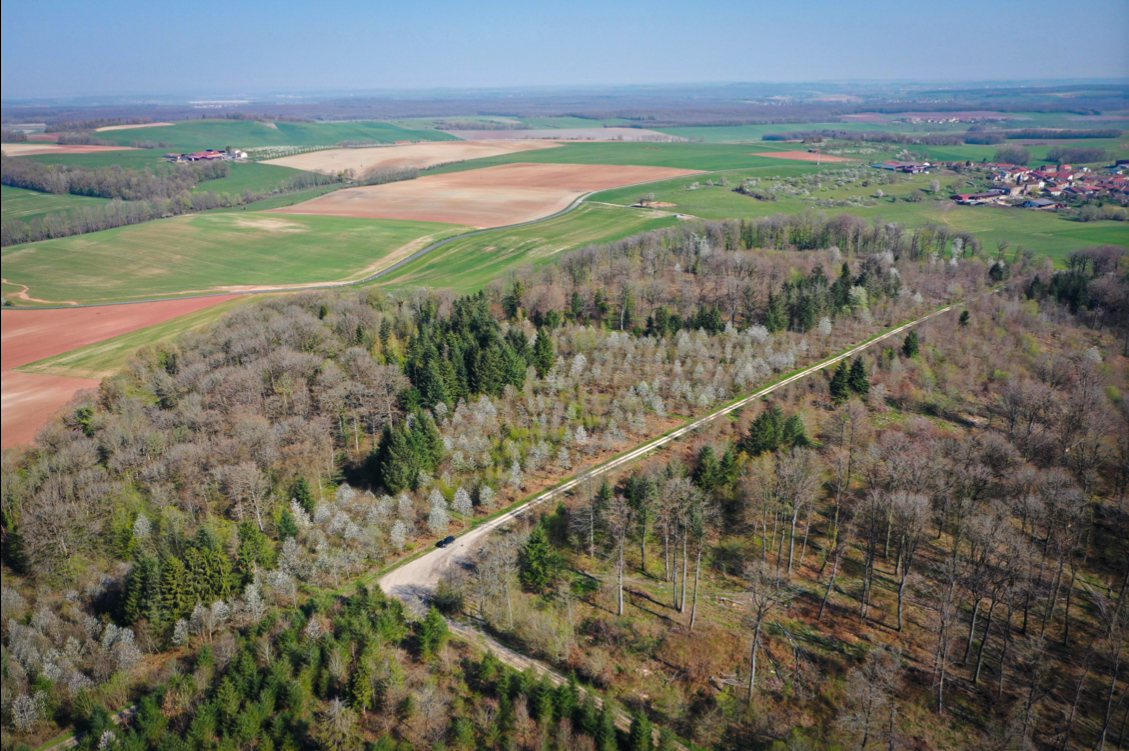 A project of Natural Assisted Regeneration supported by Reforest'Action in Clayeures , 2021

In Val d’Ornain (in the Meuse department, within the Grand Est region), the stand targeted by the project was weakened by previous forestry methods was severely impacted by the storm. The few trees that managed to survive was 95% destroyed by a tornado in September 2016. Since the stand did not show any sign of natural regeneration, trees were harvested and the parcel was replanted with douglas between 2018 and 2020. However, because of summer droughts, 70 % of trees died, which motivated this project, that aims to introduce diverse species (Douglas fir, larch, sycamore maple, sessile oak, cherry, cork) within the plot. During Winter 2021, 13.050 trees are planted.

Other forests that were destroyed by the tempest are replanted with the help of Reforest’Action : Saint-Just-en-Chevalet, Moyenmoutier ou bien Lanty-sur-Aube. 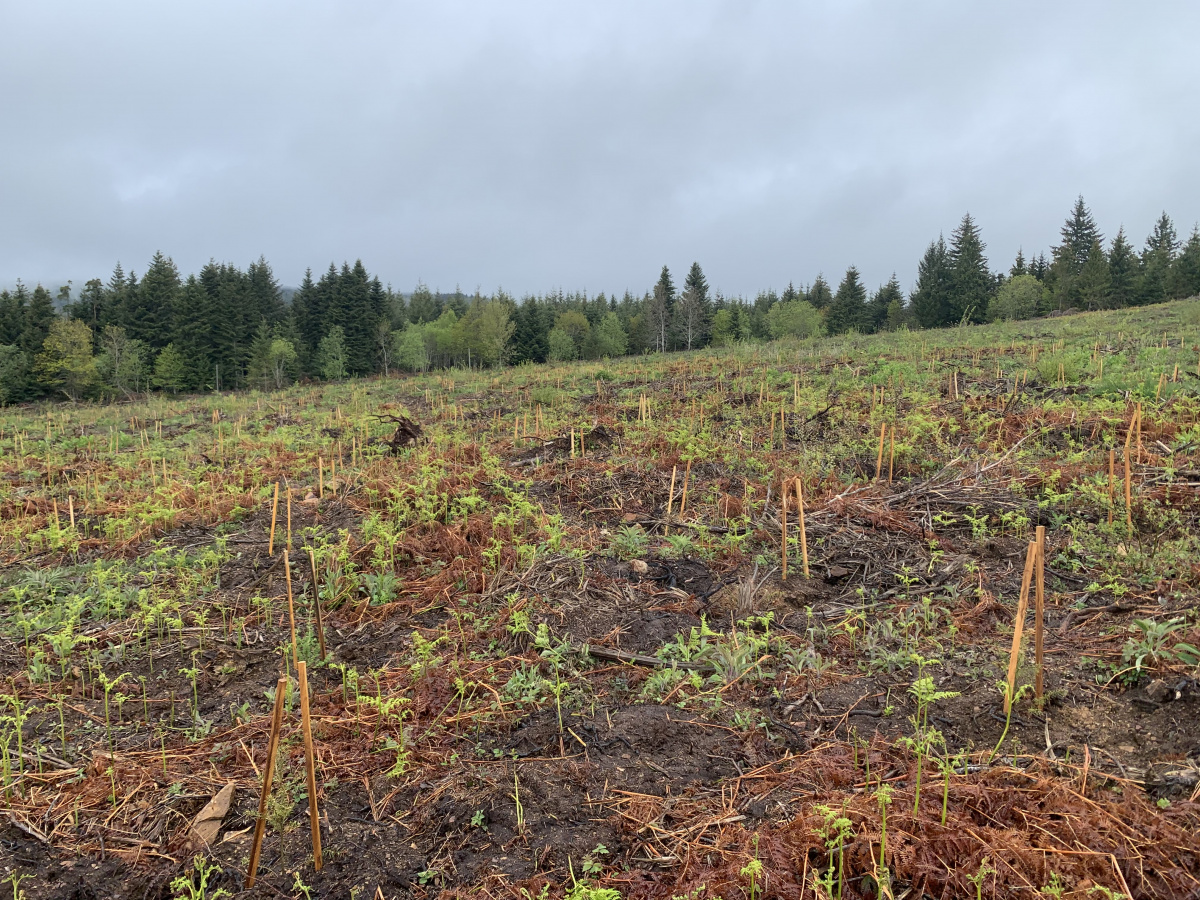 While climate change is not a direct cause of the formation of storms, they have increased dramatically in recent years. In its report published in 20203, the United Nations Office for Disaster Risk Reduction (UNDRR) observed a redoubling of climate-related disasters in recent years, with the number of disasters increasing from 3,656 between 1980 and 1999 to 6,681 between 2000 and 2019.

In this context, Reforest'Action is pursuing and supporting more projects of planting and species diversification. An approach dedicated to the restoration of degraded forests and protection of the stands against future hazards, in the context of climate change.