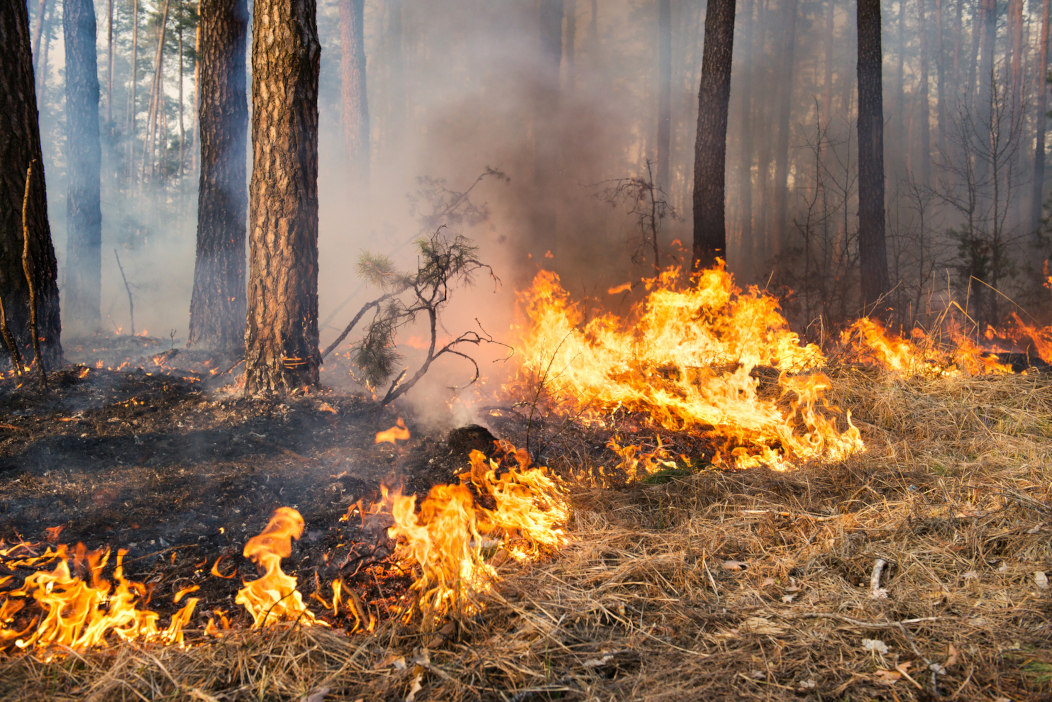 Some decades ago, natural forest fires (non-generated by Humans, such as brun farming for example) were limited phenomena that only developed in restricted regions, particularly hot and dry. Mostly due to natural events such as volcanic eruptions or earthquakes, these fires dies naturally and are easier to control. In the 21th century, these fires only represent a tiny part of fires declared in the world : 2% of fires in Mediterranean regions and 30% in Quebec, for example.

Today, the vast majority of these fires are linked to humans and their activities. According to Prométhée’s data, the national database for French Mediterrean forests, between 1996 and 2006 in France, 39% of fires outbreaks were due to malicious acts (hunting, pyromania, pastoralism, conflicts around land use) ; 23% are linked to leisure (fireworks, barbecues, hobs, butts thrown away by walkers or from vehicles) ; 21% are caused by forestry or agricultural work and 9% are accidental (rubbish dumps, power lines, vehicles fires...). The origins of these fires - that are not natural phenomena - are exacerbated by climate change : according to Joëlle Zask, a philosopher from the University of Aix-Marseille and writer of “Quand la forêt brûle. Penser la nouvelle catastrophe écologique”, “The rise of temperatures has been lowering humidity, vegetation is drying and becoming highly inflammable. Forests are also more often attacked by destructive insects and pathologies increased by heat.”

These fires then turn into megafires, incontrollable, that devastate hundreds of thousands of hectares. As a result, the multiplication of megafires over a longer period of time but at a shorter timeline generates strong socio-environmental impacts.

Another new challenge is the fires capacity to generate their own climatic conditions: big fires induce massive heat and an important plume of smoke. When reaching the sky, it interacts with the air’s humidity and creates a cloud. This cloud called “pyrocumulonimbus”, provokes storms of fire and contributes to foster fires. In addition, fires release astronomical quantities of CO2 and fine particles into the atmosphere, raising problems of public health-care and pollution.

These alarming phenomena have become common in some parts of the world, that are strongly impacted by fires: Amazonia, Southern Europe, North America, Indonesia, Siberia… But challenges are not the same everywhere. Reforest’Action decrypts for you the reasons that cause those fires.

In the United States, the triggering of fires due to human acts has represented 44% of the fires that contributed to burn over 36 million hectares of forest these last two decades. In July 2021, West America was already facing 80 wide extent fires. Climate change plays an instrumental role in this: high temperatures, droughts, insect attacks… Forests are sick, ecosystems weakened and are thus more vulnerable to fires. As a matter of fact, in California, one tree over ten is concerned by pathogenic agents, virus or fungus.

The consequences of these fires are terrible: massive loss of biodiversity, electric accidents, deaths of local populations, significant pollution… A study released by the PNAS shows that fires breaking out West of the United States emitted more than one million tones of fine particles in 2012, 2015 and 2017 and quite as much as 2018. That same year, a fire that broke out in Paradise, California, killed 85 people and burnt 14 000 houses, generating a heavy plume covering parts of North California during weeks. Results for 2017 and 2018 are still preliminary.

Amazonia: a climatic and political stake

Amazonia is facing complex issues. In this part of the world, climate change has notable impacts on forests and their health. However, agriculture (especially of soy) and livestock farming are the two major causes for the forest fires. Unfortunately, deforestation is well anchored in the region: trees are slashed-and-burned.

Rômulo Batista, Amazonia campaigner for Greenpeace Brasil explains: “Extensive cattle breeding is the main factor of deforestation in Amazonia. Today, more than 65% of deforested lands in Amazonia are cut for pasture.” In 2020, deforestation in the region has increased by 34,5%: this rise echoes on autochthonous territories and protected lands (76% and 50% in comparison to July 2019).

The election of the Brazilian President Jair Bolsonaro actually strengthened this trend, leading to  impunity for farmers: the independent agency Agência Pública has settled that penalties addressed to illegal fires launchers have decreased from 34% in 2019 in comparison to 2018 and from 40% in 2020 in comparison to 2019. Also, the Brazilian government is suspected of using deforestation as a recovery tool to face Covid-19 economic consequences.

For most people, forest fires take place at a particular time and space with extreme climatic and environmental conditions. However, in North boreal forests, winter fires are breaking out. Between 2002 and 2018, they were responsible of 0,8% of total area burnt. Nevertheless, in one year (2018), this proportion reached 38% in Alaska, in the United States and in some North-West Canadian territories.

Rebecca Scholten, postgraduate student of the University of Amsterdam and first researcher to lead a study on the topic says: “Peat soils in high latitudes contain a lot of organic matter, a kind of fuel, and oxygen, which sustain combustion. The snow and the moss and spruce needle litter also act as barriers to protect these fires from adverse winter conditions, such as rain or excess moisture, and limit heat loss.”

Three main factors are identified as facilitators for these zombie fires: high temperatures in summer that generate droughts and an extended season of fires; significant areas burnt and finally, “profound fires” burning soils from 10 to 30 cm. These three cumulated phenomena allow fires to continue burning slowly, even under the snow. These events are complicated to grasp today first because research on the topic is only starting, but above all because it is impossible to predict these fires, which are, most of the time, dissimulated. However this is urgent: in 2019, Siberian fires emitted more carbon dioxide than 36 million cars.

Also, a study from the Imperial College of London demonstrated that climate change and the rise of temperatures were directly linked to the multiplication of summer fires in arctic Siberia: in 2020, temperature was an average of five times higher than normal. This part of the world is warming twice faster than the rest of Earth.

Indonesia experienced enormous fires in recent years, especially in Sumatra and Bornéo. These highly polluting fires released major quantities of greenhouse gas emissions in the atmosphere: in 2018, Sumatra’s fires generated the same amount of greenhouse gas emissions than the entire economic activity of the United States. In 2015, many schools were closed and flights cancelled due to thick smoke coming from fires, which was carried out hundreds or even thousands of kilometers away by wind.

The issue around these fires relies on peatlands: peat combustion, that can simmer under low temperature (and even during rain season), freed carbon and methane stored for hundreds or   thousands years. It implies an intake of strong greenhouse gas emission within the atmosphere that could not be absorbed in the short-term.

In Indonesia, fires are obviously linked to climate change and droughts, but deforestation also has an important role to play. The commercialisation of palm oil for example, leads to a massive deforestation in some areas and favours natural disasters. In this way, the Cirad underlines: “These fires originate from slash-and-burn agriculture, land clearing, hunting and long-established agricultural fire-clearing practices. In Sumatra, the Cirad shows that the majority of these fires are triggered by traditional agricultural slash-and-burn practices. These have very different consequences on mineral lands or peatlands, where the smoke is denser and more harmful.” The lack of natural barriers - destroyed to develop agriculture and breeding - to slow down the propagation of fires is also an aggravating phenomenon. 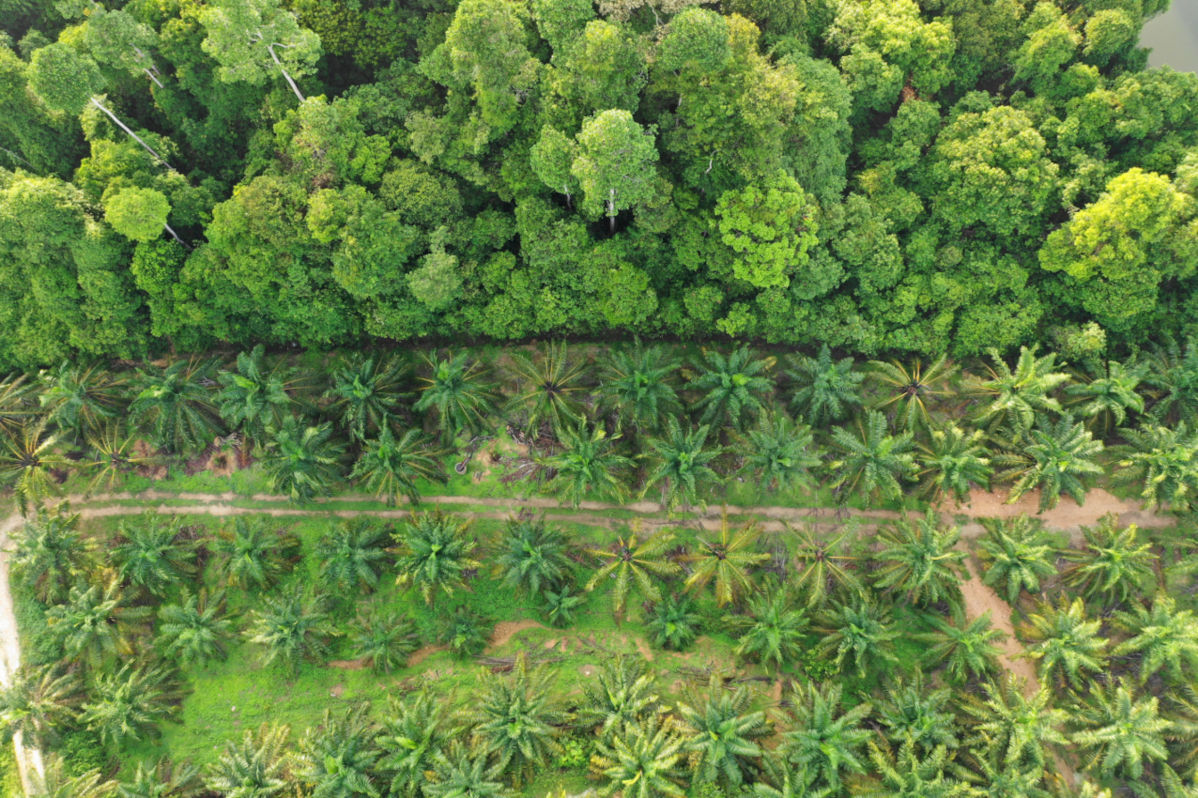 Southern Europe: an area at risk

Countries such as Spain, Portugal, Italy, Greece, Croatia or the south of France are frequently affected by major fires. In these regions, high temperatures, violent winds and droughts favour the spread of these fires. As early as 2007, the IPCC in its report made projections for 2091-2100 (based on our actual lifestyle) and estimated that the entire Mediterranean region would face - with the increase of temperatures - extremely serious and very frequent forest fires.

In Spain, for example, the impact on flora and fauna are notable: burning of biomass, weakening of the soil, warming of water and sedimentation. In terms of public health, the multiplication of these fires should lead to an alteration in respiratory functions and an increase in the risk of cancer in exposed Mediterranean populations.

However, some experts maintain that Mediterranean forests are endowed with paraclimactic species (dependent on the presence of fire during their reproduction cycle) and are therefore adapted to recurrent fires. Fires would then destroy the non-adapted vegetation and ensure the stability and adaptability of the ecosystems. The problem here is the increase in the number and intensity of fires.

Combating the rise in forest fires around the world

The issues related to these fires are now taken very seriously by the States, which develop numerous public policies to try to deal with them. In terms of safety and health - the EU's civil protection mechanism; Canada's Fire Protection Service - but also at an international scale. The fight against deforestation (imported or not) is a concern that must mobilise the international community: for example, the European Union was recently accused of being the world's second largest importer of tropical deforestation by the WWF and is therefore trying to control these practices, notably through more restrictive trade and production measures.

It is also possible to fight against this scourge at an individual scale, through our consumption choices! As the Reforest'Action awareness guide indicates, eating products with an eco-responsible label is a first step to ensure that our food has been produced with respect for the forests (chocolate, meat, etc.). Checking the origin of wood and paper products is also an easy gesture but with a strong impact to protect the world's forests.

Secondly, avoiding palm oil by reducing your consumption of industrial and processed food products can limit the impact of deforestation, particularly in Indonesia. Palm oil is not only used for the food industry, but also mostly for biofuel production. An increasing proportion of crops ends up in the tanks of our cars. So driving less and taking the train more often also has an impact. Eating less (and better) meat - especially beef - will reduce the pressure on the Amazon rainforest. Intensive soya cultivation is mainly used to feed livestock around the world, including in Europe, and livestock farming (for meat and leather) is taking up large areas of land in this region.