As part of its reforestation programmes, the Agrinotech association is currently running two projects in the locality of Saint-Michel de l'Attalaye. The first phase, conducted in 2020, and the second, carried out between August and December 2021, resulted in the planting of respectively 250,000 and 500,000 seedlings.

Over the last 20 years, the vegetation cover in Haiti has decreased by 8.7%, due to trees cuttings to meet the population’s energy needs. Today, the rate of forest cover in the country is 2%, all types of forests combined (mangroves, natural parks, forest reserves, dry forests). This is an alarming situation that confirms the need to preserve and restore forests on a national scale. At the same time, the land, 43% of which is devoted to agriculture, suffers particularly from erosion and runoffs.

To address these challenges, the government implemented in 2008 a national policy to combat soil degradation, based on two milestones: supporting ecosystem restoration and raising the population's awareness on the negative effects of land degradation.

In the area of the projects financed by Reforest'Action, carried out in the field by Agrinotech, the production of fruit and forestry tree seedlings as well as the organisation of collective planting sessions led to the introduction of 500,000 trees in 2021. This approach contributed to the achievement of three of the objectives set by the government's strategy to combat soil degradation in Haiti:

Haiti is one of the poorest countries in the world. Indeed, nearly three quarters of the population of 11 million live below the poverty line according to United Nations data. In addition, the unemployment rate across the country is around 14.5%. 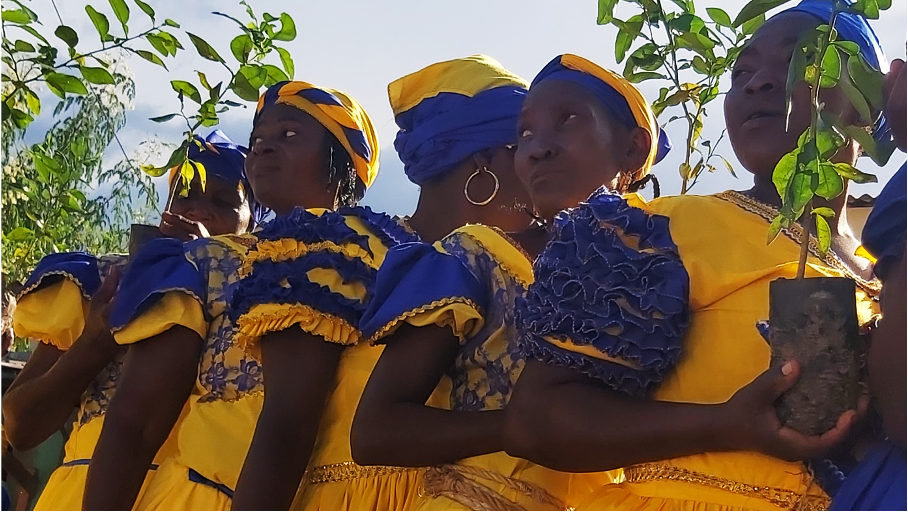 In Saint-Michel de l'Attalaye, the approach of ecosystems restoration and agro-ecosystems implementation helped create jobs for local communities but also to train project beneficiaries in the implementation of sustainable forestry practices that generate additional income.

Indeed, the introduction of fruit trees in agricultural plots will, in the long term, help meet the personal consumption needs of the beneficiary families, but also develop new value chains thanks to the products (fruits, seeds, etc.) produced by the forests.

The project has also helped recreate connections between the inhabitants, united by their desire to participate in the restoration and preservation of their environment. This approach, which has brought about change on a social scale, could serve as a model for other environmental initiatives carried out locally by citizens.

Selected in consultation with local authorities, they trained 1,000 people to act as social and economic leaders in the community.

These training sessions were also given to producers in the region, who are particularly involved in the fight against environmental degradation, so that they can contribute to reform the methods of water resources administration and ecosystems preservation in the long term.