The OECD, which headquarters are in Paris, recently committed to plant trees with Reforest’Action - in the Paris area. For each of its 3200 collaborators, one tree will be planted.

The OECD, which headquarters are in Paris, recently committed to plant trees with Reforest’Action - in the Paris area. For each of its 3200 collaborators, one tree will be planted. With 34 State-members, the OECD is a significant International Organization. Its mission: to promote politics in favor of the reinforcement of the socio-economic well being throughout the world. Within this vision, it regularly produces reports on environmental matters such as Water Management, Energetic Performance as well as Climate Change Reduction Strategies. 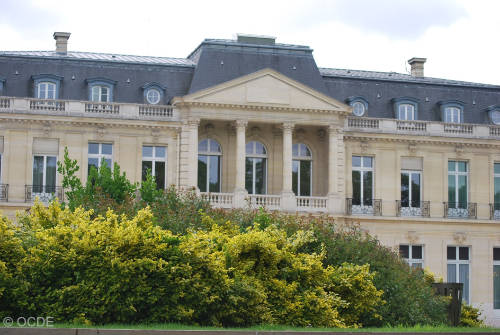 In 2010 - because it wants to be coherent with the challenges it takes up - the Organization lifted a step in reducing its ecological imprint. Since then, significant progress has been made in several areas, such as its transport fleet gas consumption, which was reduced by 43% within 5 years. Another important change, its energetic consumption has recorded a 27% decrease. In 2016, the OECD committed to plant a tree for each of its 3200 agents. Hence, involving them in developing its Environmental Strategy, and following the line adopted by the Paris Agreement. “The OECD is committed to limiting its work impact on the Environment, in a manner which is compatible with larger scale targets of green and sustainable growth”, explains Anthony Rottier, OECD’s Executive Director.

Within the next months, Reforest’Action will raise the Organization’s employee’s awareness on the benefits and issues of Trees and Forests. This winter, armed with spades and pickaxes, part of its co-workers will participate in planting around 3200 trees in a forest affected by trees in decline - nearby Bréval (Region of Yvelines). “The interactive aspect of the project is fantastic! Last May, a small group of coworkers planted around 50 walnut trees in Bréval, as a tryout. This operation prompted extremely positive reactions. The employees who participated, really felt they directly contributed to improving the Environment”, declares Mel Rusu Amancio, OECD’s Environmental Coordinator.