South Africa: reforesting the banks of the Breede and Berg rivers

This is one of the new forestry projects financed by Reforest'Action in 2021: led in the field by Breedekloolf Wine and Tourism, the reforestation of the banks of the Breede and Berg rivers, in the south-west of the country, will allow the restoration of an endangered ecosystem by fighting the invasion of exotic vegetation and planting 40 different endemic species. Discover the stakes of the project and a new video shot by our local partner.

This is one of the new forestry projects financed by Reforest'Action in 2021: led in the field by Breedekloolf Wine and Tourism, the reforestation of the banks of the Breede and Berg rivers, in the south-west of the country, will allow the restoration of an endangered ecosystem by fighting the invasion of exotic vegetation and planting 40 different endemic species. Discover the stakes of the project and a new video shot by our local partner. 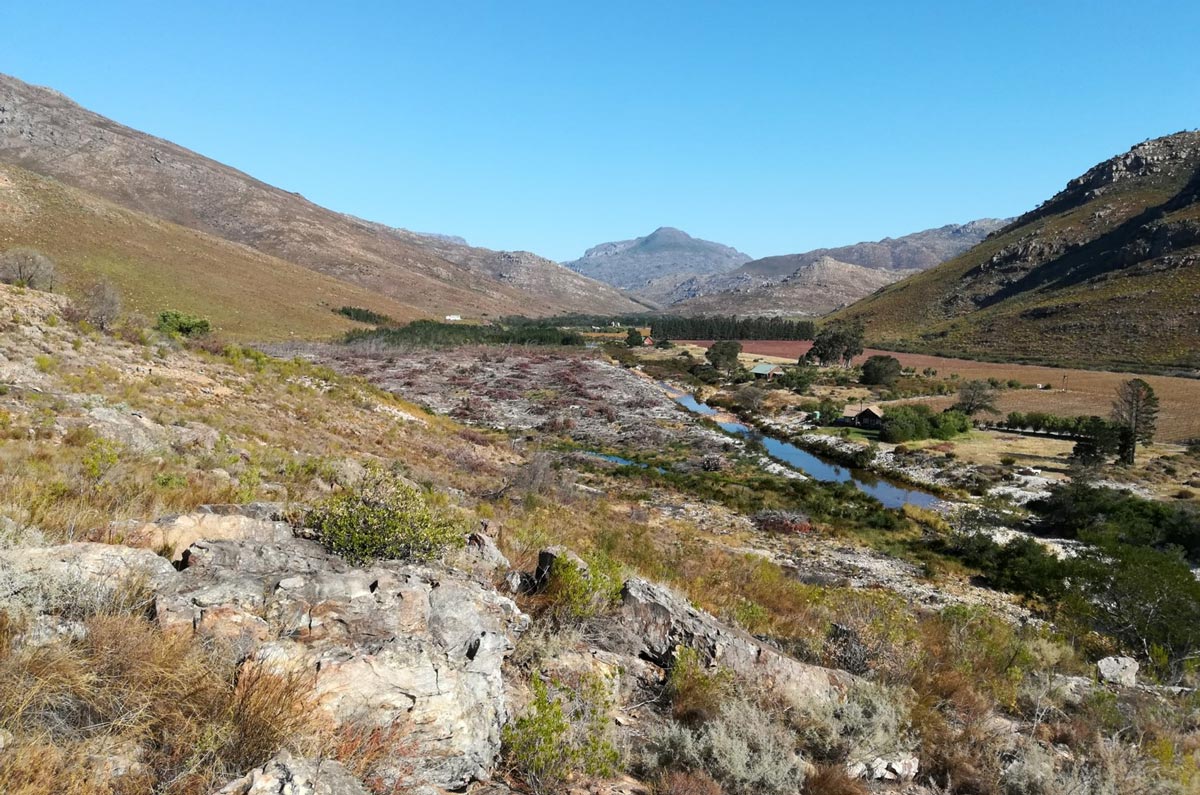 Why plant trees in South Africa?

In the heart of the Western Cape, along the Breede and Berg rivers, the fight against the invasion of exotic plant species is a major challenge for the preservation of biodiversity and water resources. The invasion of alien plants is a national threat that jeopardises the stability of South African ecosystems, negatively affecting the water cycle, promoting fires and competing with local vegetation. The original forest cover of these rivers, including endemic trees such as the Breede River Yellow Wood, wild olive and wild almond, has now virtually disappeared. In this context, Reforest'Action has joined forces with the Western Cape government and Breedekloolf Wine and Tourism. The aim is to restore the landscape to its former strength and diversity by combating exotic vegetation and replanting 100 000 trees and shrubs of 40 different endemic species.

How is the project conducted on the ground?

The Breedekloolf Wine and Tourism organisation was founded in 2003 and represents the interests of local wine producers. In partnership with the Western Cape Department of Agriculture and in association with local communities, Breedekloolf Wine and Tourism has been developing a native tree nursery project since 2009. On average, 20,000 seedlings have been produced each year within the nurseries, and approximately one third of these trees have been planted via forest restoration projects along the Breede River. The rest of the production was sold to local landowners at a reduced cost, and used in school and community outreach projects. The partnership with Reforest'Action will allow the project to expand, including the creation of a nursery dedicated to this new project component, and the continuation of this reforestation work. 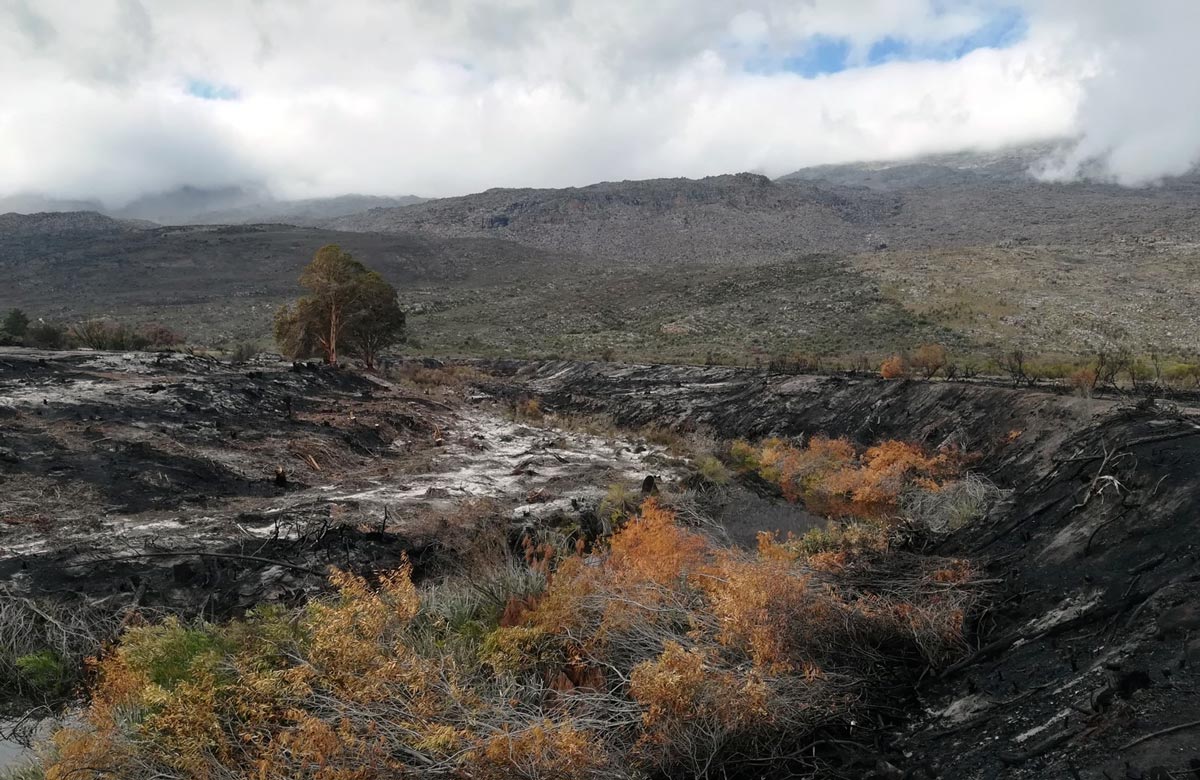 What are the objectives of the project?

The aim of the project is to enable local farmers and wine producers to combat the invasion of exotic vegetation on their land. The project will recreate a forest cover composed of endemic species that used to populate the systems to be restored, and that had disappeared from the landscape due to increased competition from exotic vegetation. The reintroduction of these endemic trees and shrubs, such as African wild olive, Cape silver oak and African boxwood, will provide the level of competition with exotic plants necessary to combat future invasions, and will restore functional ecological diversity around the Breede and Berg Rivers.

Exotic vegetation, which invades the plots to be restored, consumes and evapotranspires much more water than local vegetation. This causes considerable drought problems and greatly increases the risk of fire on the plots. Water management is crucial in this region of South Africa, which experienced a major water crisis in 2018. The planting of endemic trees will thus help combat water stress by regulating the water cycle.

The project has a strong focus on educating local farmers and school children about the benefits of reforestation and ecosystem restoration. The project also creates many jobs in the region's communities, which are affected by high unemployment, through work in the nurseries and in the field, clearing and planting trees. 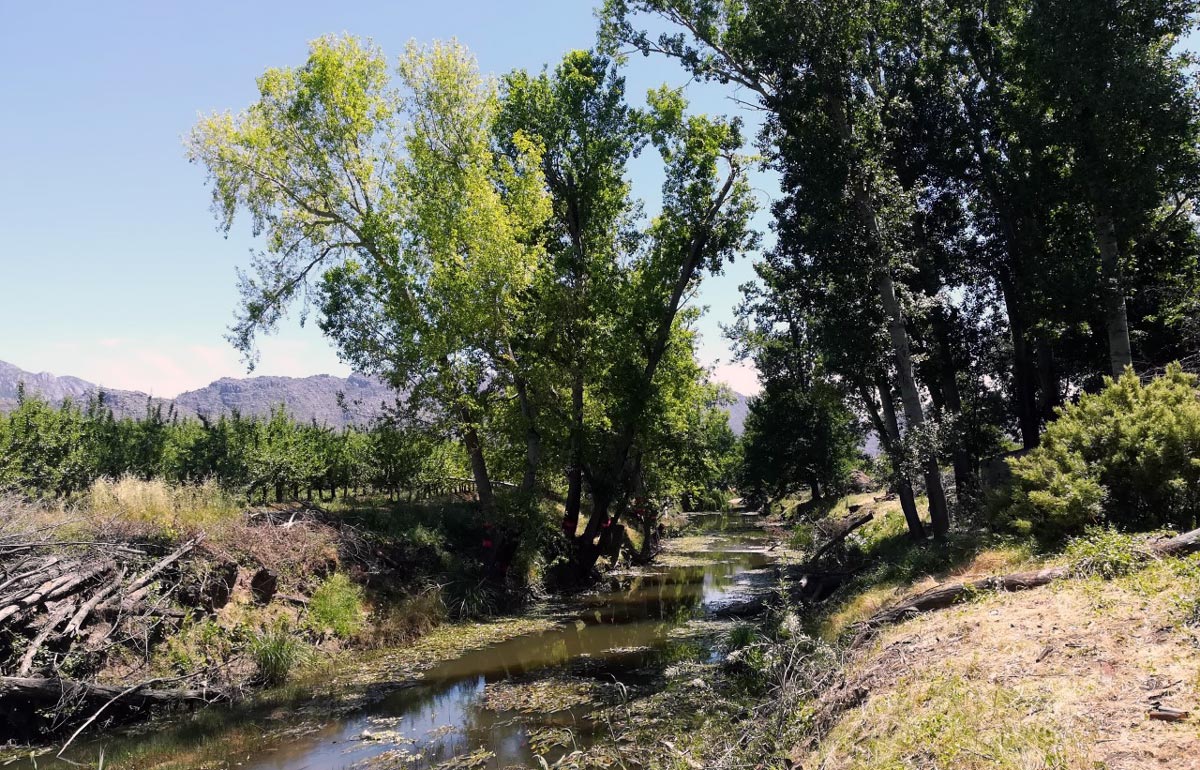 What is the status of the project?

Establishment of a dedicated tree nursury

In April 2021, activities are in their early stages. The focus is on setting up the project's dedicated nursery. Located near Tulbagh, the nursery is being co-developed by Breedekloolf Wine and Tourism and Intaba Environmental Services, an environmental company that grows plants suitable for restoring degraded ecosystems in the region. Intaba is assisting our partner in the project and plays a key role because of its extensive experience in the field of environmental rehabilitation.

Integration of landowners into the project

The trees will then be planted on plots of land owned by local farmers along the Breede and Berg rivers. Negotiations with the landowners are ongoing and the agreement they will have to sign to be part of the project has been drafted. A total of 40 plots will be needed to reach the season's target of 100,000 trees planted at 2,500 trees per site.

The sites where planting will take place differ from each other in terms of watershed, topography and soil type. The tree species will therefore be adapted to each site. With the expertise of our local partners, appropriate seeds will be collected during the germination periods of each species and then grown in the project nursery. This process is ongoing and some of the species are already in the nursery, while others will come later, depending on the germination seasons for each species. The plots will then be reforested in a phased approach, where species available and mature in the nursery will be planted first, and then supplemented by other species as they can be harvested and grown in the nursery.