Vitiforestry at the Ruinart Champagne House to regenerate ecosystems

Accompanied by Reforest'Action, the Ruinart Champagne House has been deploying a pilot project since 2020 in its Taissy vineyard, north of the Montagne de Reims, in the Marne region. A great plot of almost 40 hectares near the Montbré forest was considered an ideal setting. A rare unit area in the Champagne region, it has become a place for experimenting with vitiforestry - applying agroforestry techniques to the vine. Planting trees in the middle or around the plots, cultivating in layers, or developing assisted natural regeneration: there exist various agricultural practices. These techniques can regenerate the soil, preserve water, sequester carbon, and safeguard biodiversity. Multiple stakeholders are also involved in the territory. 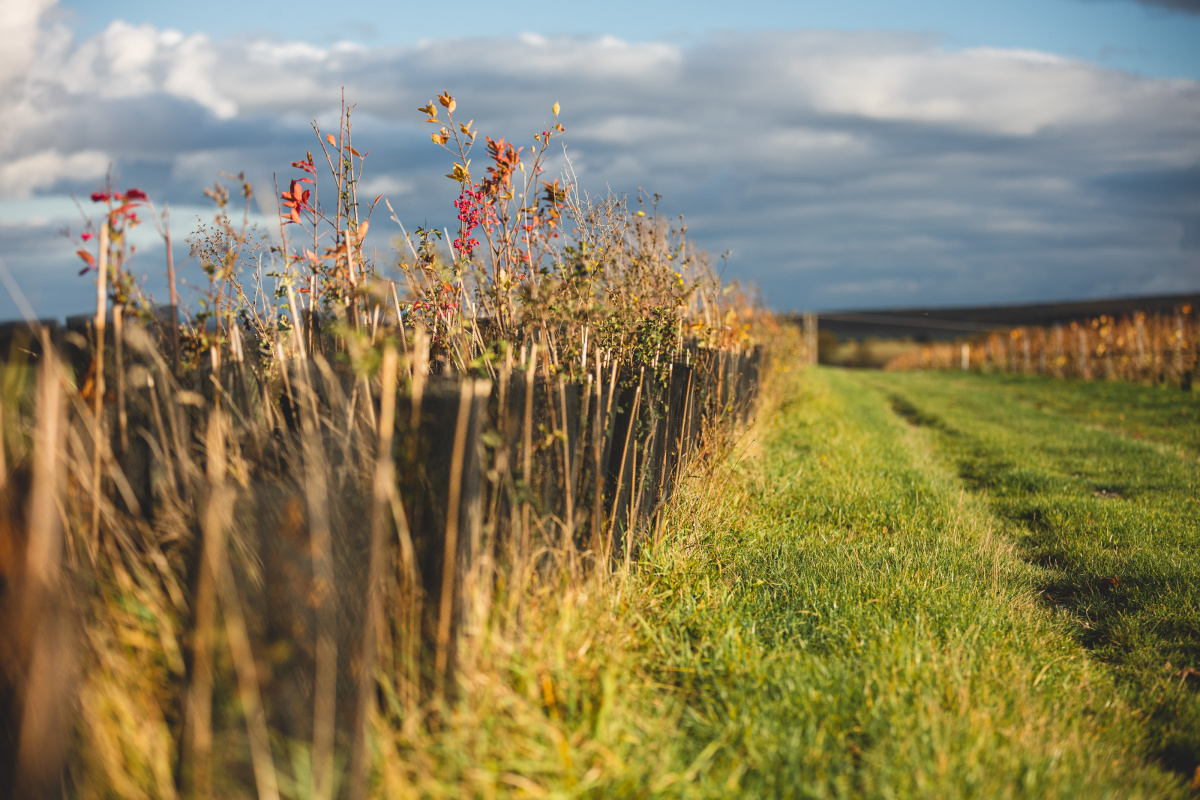 A wine-forestry project is often a story of people, land, opportunities, and choices.

In this case, Ruinart had already taken action for many years to reduce its greenhouse gas emissions and combat climate change. Indeed, in thirty years, the average temperature has increased by 1.1°C in Champagne, and the vine cycle is directly affected. Thus, the 2022 harvest in Champagne began on August 28 - the seventh harvest to start in August 2003. Fifty years ago, it took place in late September-early October.

The Champagne House is currently seeking not only to fight but also to adapt to climate change. Through the development of "Research and Innovation" projects, it wishes to address issues related to biodiversity, water, and soil. Furthermore, it expects to contribute to developing a "new approach" to viticulture in Champagne. In this context, the collaboration with Reforest'Action started in 2020. A few months later, 96% of some 5,000 seedlings had taken root, and the vitiforestry project was gradually formalized.

Ruinart's pilot project is ambitious. Indeed, the objective is to plant a total of nearly 20,000 plants, trees, and shrubs by 2023:

Vitiforestry: a practice with multiple benefits

In addition, ecological corridors appeared in the context of a single-crop vineyard by planting hedges and trees around and in the heart of the vineyard. This technique helps create a microclimate protected from northern winds. Corridors also ensure connections between biodiversity reservoirs. This ensures that species can move around and complete their life cycle in favorable conditions. The orchestration of such diversity has thus favored the creation of a mesh at the service of the fauna and flora.

Louise Bryden, Ruinart's oenologist, explained in an interview that "by restoring healthy ecosystems, the company hopes to meet the challenges of climate change, sustainably regenerate the soil, have a vineyard that is more resistant to diseases and pests, and continue to produce Ruinart wines in the future.

Expertise to guarantee the efficiency of the project

Although simple on paper, a wine-forestry project becomes extremely technical in practice.

For example, in the Ruinart Champagne House project, various parameters had to be considered – particularly the shading created by the vegetation and its impact on yields. The teams also had to consider possible water competition and production constraints, such as the passage of machinery through the vines.

It was imperative to avoid any risk to the vines. For example, it could have been affected by possible disease propagation. Fruit trees and hazelnut trees were thus discarded. They were likely to introduce diseases such as "esca" in the heart of the vineyard.

In addition, adaptive management is encouraged. Practices can evolve depending on the context, whether economic, personal, community, ecological, climatic, or bioregional.

According to Louise Bryden, it is crucial to ensure that these ecosystem changes are measured through scientific monitoring.

It is also necessary to use, for example, precise indicators for the monitoring of plots of land managed as vineyards or others, considering the species planted. They can also allow us to feel the people positively impacted.

Towards a regenerative economy that values collaboration with ecosystems

The practices of vitiforestry allow the regeneration of ecosystems. They take place adapting to each context, climate, and Region. They accept constant learning processes - through trial and error, incorporating new ways of growing according to each environment.

As part of this regeneration effort, various stakeholders take part in the project.

In particular, Maison Ruinart has been keen to share its experience with institutional players such as local authorities. The municipality is very interested, especially since its motto is "one inhabitant, one tree. This interest is also shared by the Region, which looks at the project with interest. It could be a pilot for creating an ecological corridor on the Montagne de Reims. Ruinart has also worked with the "Grand Reims" on the Montbré project - the forest surrounding the Montbré fort above the Taissy vineyard. This forest is a reservoir of biodiversity.

The company also supports its partner winegrowers in similar initiatives in their vineyards, as well as all the players in the Champagne region - through the Comité Champagne, for example. To help them, it provides them with Reforest'Action's expertise to build tailor-made projects adapted to their plots.

The forest, the vineyard, the vines, and the plain are all connected. Consequently, they form a coherent whole that is favorable to the regeneration of ecosystems.

The project is part of the IMAGINE movement, which brings together actors wishing to mobilize worldwide for the preservation and regeneration of forests on a large scale to fight against the climate emergency and restore biodiversity. Imagine project: https://imagine-forest-team.com