Reforest and diversify this monospecific plot of spruce trees affected by the bark beetle!
Loading...
{{ map }}

Reforest'Action and its partner Sylva Nova invite you to reforest this plot attacked by a pest!

This 1.5 hectare plot is part of the vast forest massif of the Ardennes in Wallonia. This region has approximately 530,000 hectares of forest, i.e. almost 30% of its territory, and alone concentrates almost 75% of the Belgian forest. Over the past centuries, the forest has been heavily overexploited to meet the needs of agriculture and energy in particular. However, since 1854, thanks to the introduction of specific legislation, the forest cover has become more permanent but its diversity has been reduced, notably with the introduction of resinous species.

Indeed, the trees in this plot were until then monospecific, i.e. exclusively composed of a single variety of tree, the spruce. Like agriculture, this management method is risky for several reasons: soil impoverishment, loss of biodiversity and increased risk of biological attack by pathogens or insects. Forests managed in this way are also more sensitive to adverse environmental conditions such as storms or droughts. In the context of current climate change with successive heat waves and low rainfall, it is necessary to change this model of forest management which we can now consider obsolete.

In this particular context, the trees have been attacked by an insect, the bark beetle. This beetle feeds on dead wood but also on living wood, thus disrupting the circulation of sap, the tree's vital liquid. The spruces of the plot had to be removed and a reforestation action is now necessary. This tree planting project will make it possible to recreate a healthy forest ecosystem, with species resistant to bark beetle attacks. In addition, this plantation will make it possible to reintroduce deciduous trees, as they are home to a greater number of animals and plants than conifers. 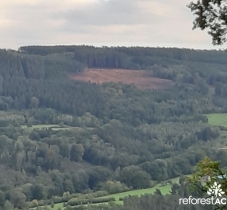 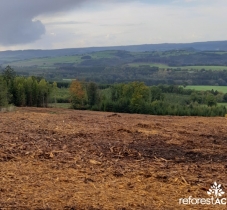 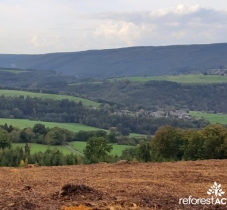 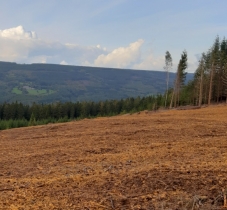