Contribute to the transformation of the Pays de la Loire landscape by restoring the bocage!
Loading...
{{ map }}

In partnership with the Horizon Bocage Association, help owners of agricultural plots to build a network of hedges to break up large agricultural areas.

Reforest'Action and its partner Horizon Bocage invite you to restore ecological corridors by planting hedges.

These operations have several objectives. The challenge at the territorial level is to reconstitute the green and blue fabric in Pays de Loire, a region very marked by years of consolidation, where the plots concerned are located in an area where livestock farming is increasingly under pressure from cereal crops. A few hedges and woodlands still present form the remains of a landscape that was once rich in the area. There is still time to act to restore the plant continuity necessary to support the region's very fragile biodiversity. Indeed, this sector is one of the least wooded in France.

These future plantations of rows of trees and dense hedges will provide a refuge for threatened local biodiversity. The establishment of hedges will also strengthen the territory's livestock identity and not just the large-scale crops that often lead to so-called "openfield" landscapes.

These hundreds of trees and shrubs will enrich the local plant heritage. Indeed, the various plantations have on average about fifteen different species. This diversity of species makes it possible to shelter a large number of species that are culture aids, they protect them from pathogen attacks.

Plantations are generally organized as follows in order to obtain a true forest ecosystem: 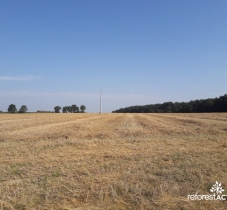