Reforest’Action and its partner Sylva Nova invite you to finance the afforestation of a forest massif following a pest attack !
Loading...
{{ map }}

Reforest’Action and its partner Sylva Nova invite you to finance the afforestation of a forest massif following a pest attack !

Around the hamlet of Walik, the plots targeted by the projet were exclusively populated
by spruce trees. In this region, monoculture, carried out for economic purposes, is very well established. Unfortunately, this type of practice makes the stands more sensitive to climatic hazards or insect attacks. For example, the spruce stands in the area have been decimated by the bark beetle.

This xylophagous insect participates in the decompo- sition of dead wood and thus in the enrichment of the soil. But it can also attack living trees, causing them to die, which is not unusual among single-species stands.

As part of the reforestation project, several species of deciduous and coniferous trees will be planted to promote the resilience of the stand, for it to resist bio- logical attacks. In addition, this diversity will increase biodiversity within the forest. The trees planted will help store carbon, which is crucial in the fight against global warming. 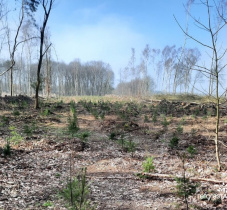 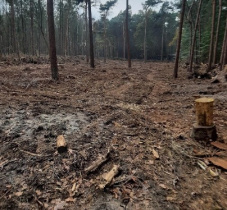