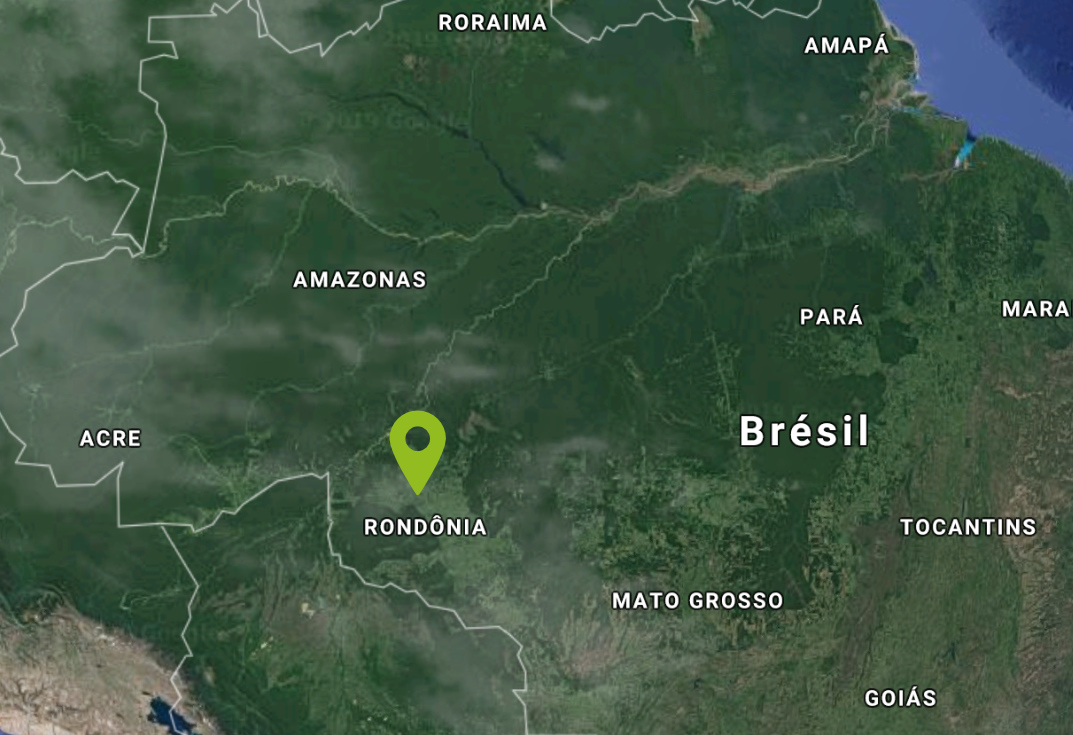 THE BRAZIL PROJECT IN BRIEF

With 4 million trees disappearing each year, Amazonia, one of the three largest primary forests in the world, is also one of the most affected by deforestation. This is due to industrial agriculture, which generates two thirds of deforestation in South America. Brazil, the world's largest soybean producer, has converted 18% of its forest ecosystems since 1970 - through clear-cutting and fire - to livestock, soybean and oil palm cultivation. According to Greenpeace, the number of fires recorded in the Brazilian Amazon between 1 January and 20 August 2019 increased by 145% compared to the same period in 2018.

Our reforestation project is located in the state of Rondônia, in the southwestern Brazilian Amazon. In the early 1990s, only 2% of the forests in Rondônia were felled; today, 28.5% of the land is destroyed, the highest rate of all the Amazonian states. The State of Rondônia is part of the "arc of deforestation", which refers to these vast Amazonian territories where the agricultural border and deforestation have increased significantly in recent decades.

On the spot, the agro-economic model of the local populations is based on slash-and-burn farming, a temporary soil fertilization technique that consists in burning a plot of land bare to provide it with nitrogen before cultivating it with soya beans in particular or grazing livestock. After exhausting exploited land, local small farmers abandon it and replicate the process on another land, in a circle of endless deforestation. 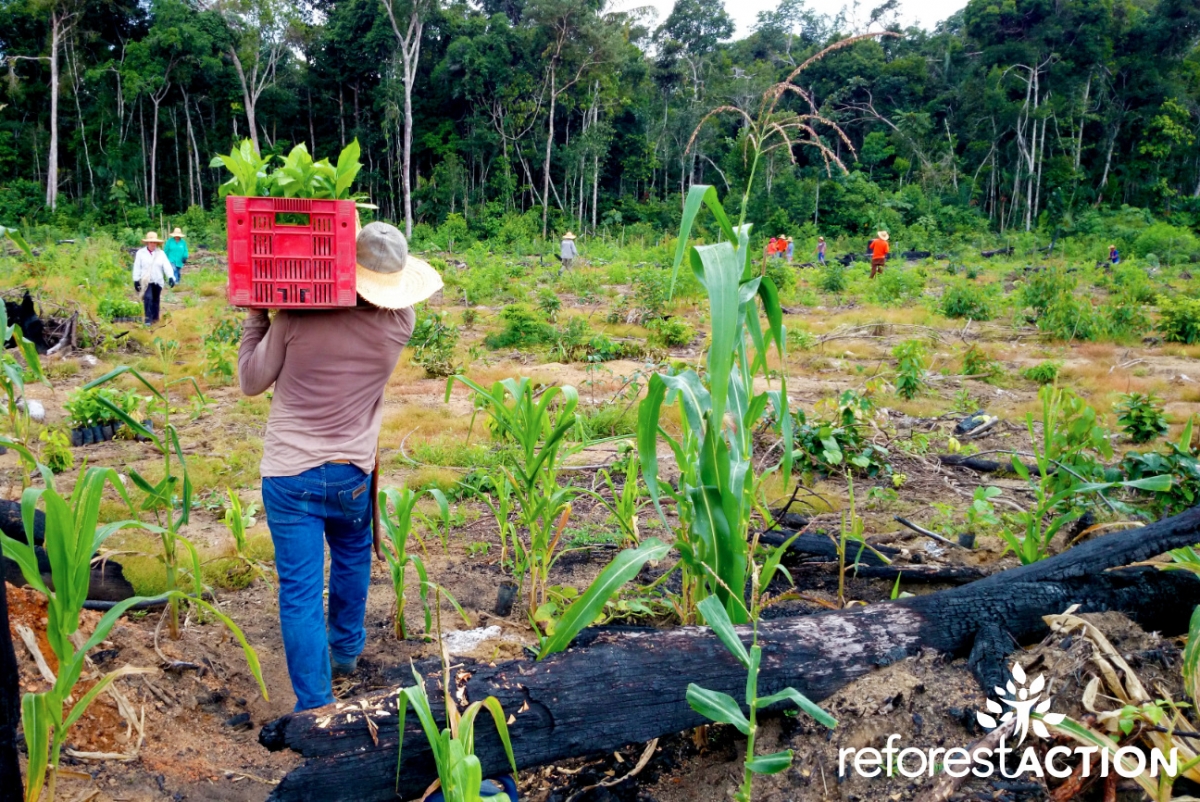 OUR ACTIONS AND OUR PARTNER IN THE FIELD

Reforest'Action is partnering with the Rioterra Studies Centre, a project leader whose action has been partially curtailed following the substantial reduction in public funding resulting from the election of the current President of the Republic of Brazil. This reforestation initiative is intended to complement the essential efforts to reduce deforestation to which each State, organization and citizen must contribute, particularly by acting against imported deforestation.

Encouraged by Rioterra's advice, local farmers are integrating agroforestry into their farming practices. In practice, agroforestry allows them to earn more income per hectare than soya or livestock farming. They are thus becoming aware of the importance of forest cover for their food crops, and of the ability of trees planted in and around their fields to enrich cultivated soils. As a result, slash-and-burn farming loses its interest in their eyes. Our project thus makes it possible to support local populations towards a sustainable agricultural production method and thus break the vicious circle of deforestation by burning.

In addition to reducing deforestation, the project also contributes to the restoration of deforested areas of forest through a variety of local species grown in nurseries.

Our reforestation project involves 7 municipalities in the State of Rondônia: Porto Velho, Candeias do Jamari, Itapuã do Oeste, Cujubim, Rio Crespo, Machadinho d'Oeste and Ji-Paraná. The latter two are on the list of the largest deforested areas in the Amazon and contain the Rio Preto Jacundá Reserve and the Igarapé Lourdes Indigenous Peoples Reserve respectively.

Among the species planted, all are local. These include the cocoa tree, which will enable producers to generate additional income by selling cocoa; the acai, which produces berries with highly nutritious qualities; the cupuaçu, which produces a vegetable butter sought after for its soothing and repairing properties; Roucouyer and andiroba, known for their medicinal properties; peach palm and Amazon walnut, whose fruits or nuts are consumed by local populations; and courbaril, which will eventually be used to produce quality wood.

Our partner Rioterra ensures the follow-up of the planted trees through field visits by their experts and images taken by drone. A technical representative of the NGO visits the site once a month for the first six months, and every three months thereafter to ensure the proper growth of the trees, and the sustainability of the agroforestry systems put in place. 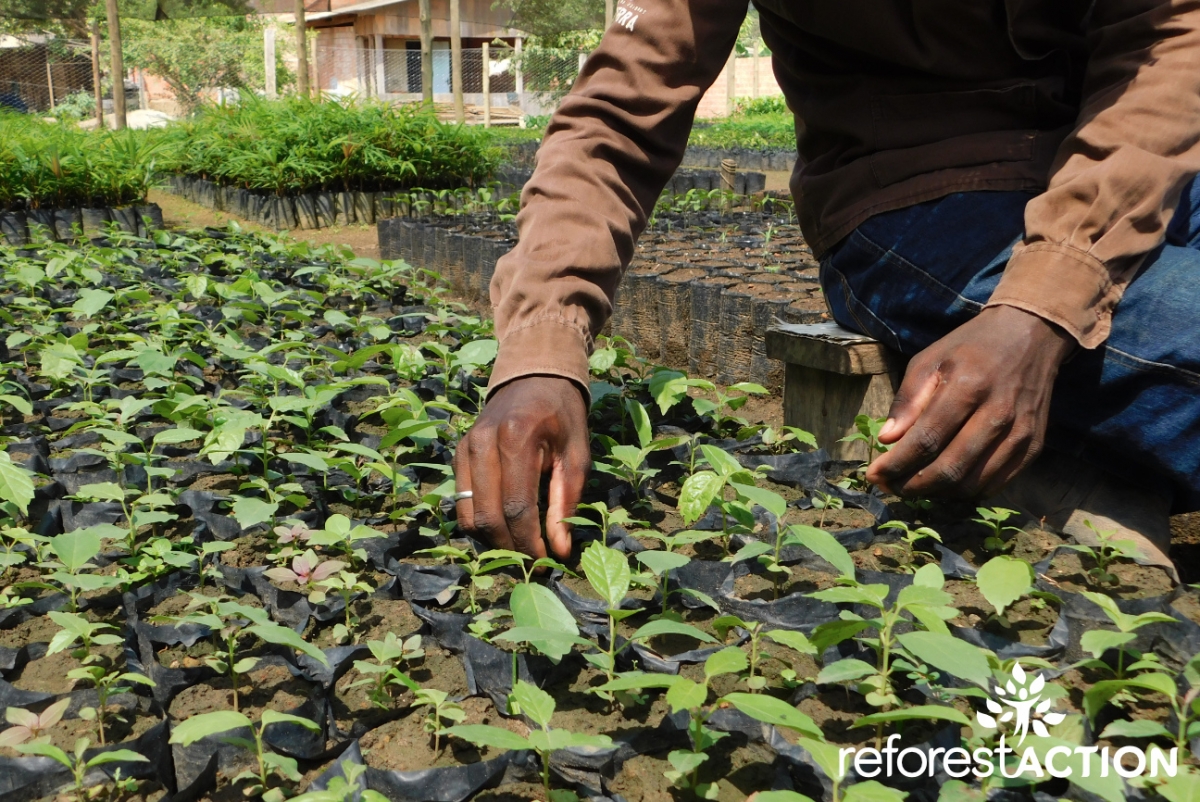 BENEFITS OF THE PROJECT

In addition to carbon storage, released in large quantities into the atmosphere by the cutting and burning of the Amazonian forest, the benefits of planted trees are numerous: restoration of deforested or burned areas, development of agroforestry, conservation of tropical biodiversity, improvement of the water cycle, generation of additional income for local populations from the sale of non-wood products such as cocoa or acai, strengthening food security through tree fruits, etc. 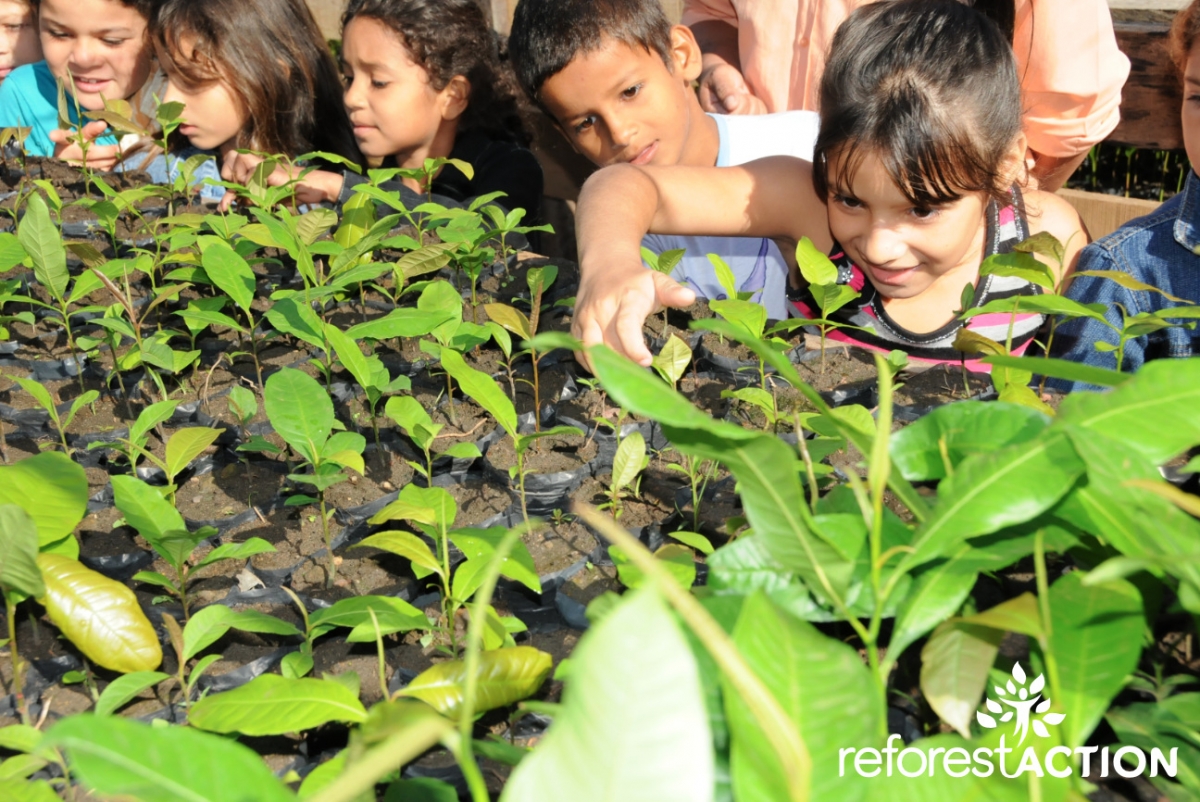