Anchored in the heart of the Andes, the project financed by Reforest'Action and carried out in the field by Impulso Verde aims to reforest and reduce anthropic pressure in the páramos of Chile-Cumbal and around the Páramo de la Paja Blanca Regional Natural Park.
Loading...
{{ map }}

Anchored in the heart of the Andes, the project financed by Reforest'Action and carried out in the field by Impulso Verde aims to reforest and reduce anthropic pressure in the páramos of Chile-Cumbal and around the Páramo de la Paja Blanca Regional Natural Park.

Colombia is the fourth country in the world most affected by deforestation and the second richest in biodiversity after Brazil. Moreover, it is the South American country that has experienced the longest internal armed conflict. The signing of the peace treaty with the FARC guerrillas in 2016 has eased tensions in many territories. Nevertheless, the access made possible to areas previously in conflict and the subsequent development of economic activities have led to a sharp increase in deforestation.

Reconciling ecosystem preservation with economic development is a major challenge for the Colombian government. The latter has backed up the peace agreements with a major plan for the sustainable development of the territories concerned and has set an objective of reducing net deforestation to 50,000 ha/year. This is a strong ambition given the 190,000 ha deforested in 2019 in the country.

In the Andes, which concentrated 26% of Colombian deforestation in 2016, the loss of forests and trees has a strong impact on erosion and water resources. The capture of this and its storage are provided by unique ecosystems in the world: the páramos. These are the most biodiverse mountain ecosystems on the planet. Today they are threatened with disappearance due to climate change and the extension of agricultural surfaces.

Our partner in the field

Impulso Verde works for the reforestation and protection of forests and biodiversity in Colombia. The NGO federates and animates a network of tree nurseries with indigenous Pasto communities. The development model allows for the gradual training and involvement of more and more communities in the network as the reforestation program expands. This allows for the expansion of tree production and planting capacity to meet the very significant reforestation potential in the region over the next few years. The creation of the structure has also enabled the establishment of important national institutional and academic partnerships.

Our actions in the field

The first objective of the project is to protect and restore the páramos and alto-andine forests through the reforestation of the watersheds (spaces that drain all the water of a territory to an outlet such as a river). The reforestation area is located within the Chile-Cumbal páramos complex and around the Páramo de la Paja Blanca Regional Natural Park, also known as Chiltalzón, "mountain full of water" in Pasto. The latter provides water to approximately 100,000 inhabitants in seven municipalities around the park. In 10 years (from 1997 to 2007), the páramo lost a quarter of its original area. By planting more than 40 different native tree species, the project will have a direct impact on the protection of local biodiversity and water resources. In order to make the reforestation project possible, activities to expand and strengthen the existing nursery network will be carried out through the purchase of materials and equipment, the production of new plants and the construction of new nurseries. 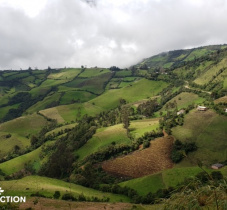